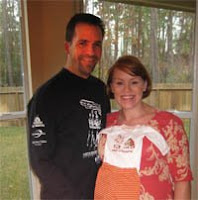 In one hour we leave for the hospital. We check in at 8:30 p.m. and they start the induction again. In the morning, well, who knows? The only thing we know right now is that from our first attempt to this second one, we’ve learned some important lessons, of which we’ll highlight one.
Our most important lesson has been to differentiate “will” and “may”. As I see it, “will” is a verb that indicates one’s desire to create and implement a definite plan, whether or not one has control. “May” indicates an understanding that one is not in control. In fact, God is in control, and often His plan doesn’t look like our plan (but so much better!)
In the case of our first attempt to deliver Julianna, I said many things last week using “will”. Here are a few of examples:

If I take those same sentences and substitute “may” for “will”, they are so much more open to the reality of change. That’s a good thing, I think, as change happens so often when we least expect it!

So, here we go again. We look forward to letting you all know how the next few days go. We may have Julianna in our arms tomorrow or Saturday; we may be home on Sunday or Monday. Whatever happens, we will take it in stride and appreciate each moment for the adventure it is.

Thank you for your continued prayers!

I am so thankful for this picture and the friends

Always ready for a challenge, Julianna joined the

Happy Sankta Lucia Day! May you all have a day fil

As an early 11th birthday present for Julianna, we

Thanks to #bayoucityraceseries for this wonderful

The cuties were so happy to wear their shirts to s

Congratulations to my precious loves who seized th

A little Bob and Larry can bring a smile to anyone

As we gathered by the river to swim, fish, frolic,

On the heels of a wonderful week at family camp—

We love a mountain town excursion! And finding sno

Climbing the Arches and making our own! @redbull #

The trek continues! We had so much fun in the Texa

After this long year of housework and homework and

We’re on the road again, and this year we’re u

You can’t tell it from this photo, which only sh

Woodlands Civic Ballet did a great job on Swan Lak