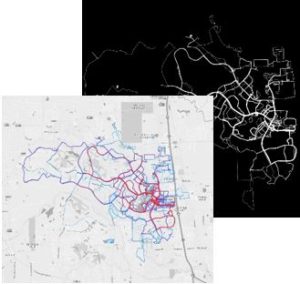 I recall spending some time reflecting on my 2018 running adventures in the fading days of December. This was largely inspired by a curiosity of what my Strava Heatmap looked like for the year. I have often joked that much of the reason I collect so much data on my activities is I like the pretty pictures that come about as a result. Of course, I am an engineer, and some may challenge my assertion that charts and metrics are a form of high art. The reality, however, is that I am fascinated by the physiological adaptations that come about through different training methods and the prospect of predicting my race results through performance metrics.

I ran just over 2100 miles in 2018. That happened through 275 runs over roughly the same number of hours. I participated in three marathons during the year and logged two additional 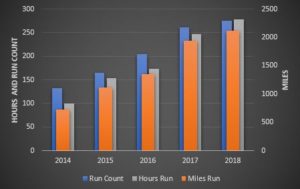 marathons by the time I finally ended my “season” in the early part of 2019. I was certainly ready for a rest and am still struggling a bit to dig deep for the next goal.  I have now been running for five and a half years and have participated in eight marathons over this time.

In January of 2018 I achieved my first BQ (Boston Qualifier). This came about at the Chevron Houston Marathon. The conditions were great! We started the race with temps in the mid-30’s and finished in the low 40’s. I was on a sub-3 pace through the first 12 miles. A short time later I pulled off for a bio-break and lost a fair amount of momentum. I ended up finishing with a time of 3:09:25 and nothing left on the table. My lessons from the race were in the realms of pacing and nutrition. (I still have much to learn in both of these arenas.) While I believe I could have shaved a couple minutes off the time, I felt great about where I landed and recorded PRs at 10k, 10-mile, half-marathon, and marathon distances. I also started a tradition of enjoying Rocket Fuel as part of my post-marathon celebration. 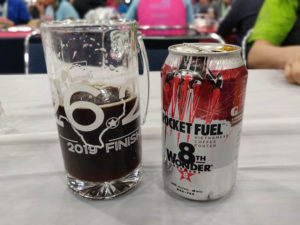 Two days after the marathon I was back to running. As it turned out, this was foolhardy. Between the lack of recovery time and a change in stride brought about by running on the treadmill during some foul weather, I ran my way into a diagnosis of patellofemoral stress syndrome. (a.k.a. “runner’s knee” or put in another way, that thing that happens when you don’t properly cross-train, strength-train, or recover.) The pain was rather intense and I ended up going to the ortho for a consult. The x-ray and symptoms gave reasonable chance that I was suffering from a meniscus tear… so off to the MRI machine I went. After reviewing the images, the doc, a well-respected athlete and orthopedic surgeon, gave me a few fancy words to help me feel better about the pain and sent me on my way with some topical meds, instructions to spend more time cross-training, and those ever so confusing words “if it doesn’t hurt too much, you can keep running.” This falls in the same line as that question they ask when you go into the clinic for an injury: “On a scale of 1 to 10, how bad does it hurt?” The problem I have with that question is I take it literally and as such struggle to claim a number above a 4.

Do I ever hurt when I run?  Yes, but isn’t it supposed to hurt. Why else would you call it a workout?

Do I sometimes feel like I am going to faint from the pain while walking down the hall with a running injury?  Yes, but it gets better after the first 100 feet or so.

So, on this scale question, I figure a 10 would be someone cutting off my foot with a dull saw and no pain killer. If 10 is the upper limit of the scale, it should be the worst pain I can imagine. I can imagine some fairly intense pain, as such, anything less than that seems like it should live on the opposite side of the scale. If I rank the pain above a 5, it is likely I am hurling or going faint.

With a name to my knee pain, I eased up for several weeks, but then started to ponder what I would do with my Woodlands Marathon registration. I soon learned my friend Bob planned to run in the event. Bob is a great encourager and was a huge inspiration in my early running days, I floated the idea of running the marathon socially within him and started adding back some moderate training miles. I really enjoyed myself during that race!  No pressure, no time goals, no agenda. Just a long run with a good friend. 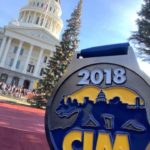 With the race season at its end and the hot days of summer just around the corner, I eased off of any formal training for a few months. The next big event was scheduled early December: CIM, the California International Marathon in Sacramento. I dug deep in the training for this race, closely following Hanson’s (err, Humphrey) Marathon Method, the plan I used leading into my PR at the Houston Marathon. Things were going well for the front half of the race. I fell off the proverbial cliff from there, however. I lost contact with a 3-hour pace group around the halfway point and continued to lose time as both thighs and calves began to cramp. This wasn’t the result I was hoping for, but it was an all-around good experience enjoying the time with friends and family and the beautiful CIM course. While I didn’t reach my goal for the marathon, I managed to take 6 PRs at shorter distances. I suspect I would have hit my mark had I targeted a 3:05 finish. The 2:58 pace I was running for the first 15 miles, however, was outside my limits and I cracked around the 17-mile mark. 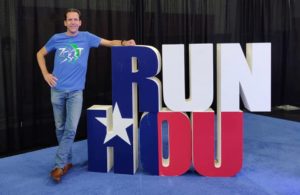 After considering my options for a week, I jumped back into action and signed up for the 2019 Houston Marathon, scheduled for eight weeks after CIM, in mid-January. At this point I had run marathons with self-curated plans based on Hal Higdon’s methods and Hansons Marathon Method. I decided it was time to call in the experts. I signed on for a custom planning plan with Vantage Point Endurance with coach Ronnie Delzer. The next six weeks of training certainly upped the game. While I appreciate Hanson’s focus on physiological adaptation and the concept of running efficiently when fatigued, this method doesn’t include runs longer than 16 miles. I am convinced this was a key factor in challenges at CIM. The Houston race was a victory. I paced well and hit my target of 3:05. My only regret is failing to hold to my nutrition plan. Along the course I convinced myself that fiddling with my back zipper for a gel would slow me down.  (For marathon’s I run with two gels on the side of my hydration bottle and three in my back pocket.) So, my last fuel, other than course Gatorade, was at mile 12. I started to feel the gravity of this mistake in the last four miles of the race. In the last quarter mile, I had nothing left. My muscles weren’t cramping or seizing up and my cardio was in check, but it took that I had to keep my legs in motion.

Given this is a 2018 retrospective, I will save my 2019 Woodlands Marathon Relay and my Boston debut stories for another day. This narrative, however, wouldn’t be complete if I didn’t mention zero dark thirty (ZDT). Simply put, this is my running community. Named in recognition of our early morning runs, the group has become a foundational part of my running story. A group of wonderful fast fun encouraging friends. 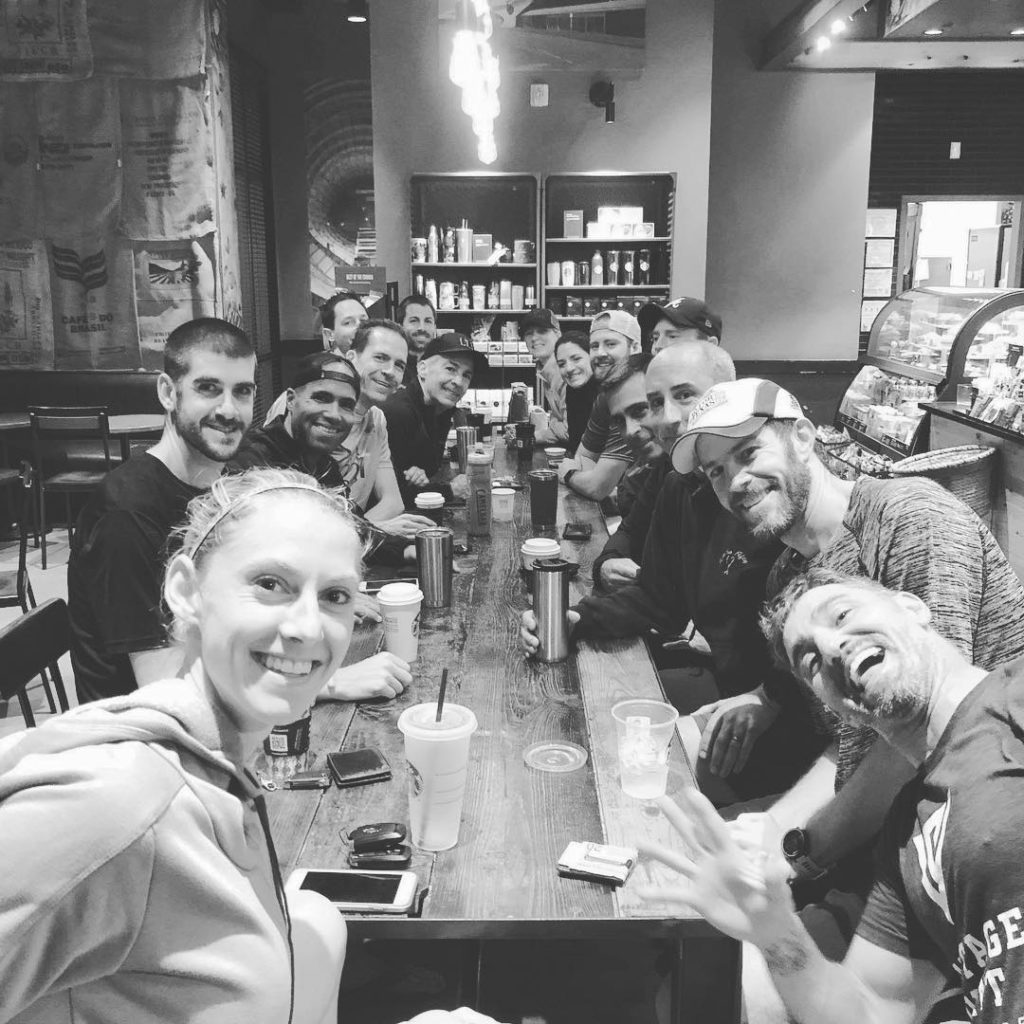 One Reply to “Running Retrospective, 2018 Edition”